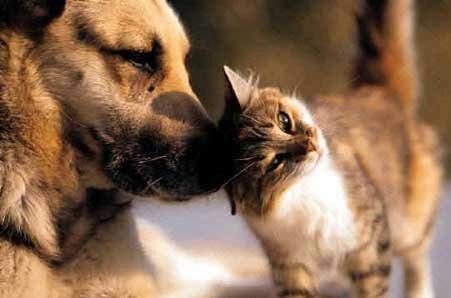 Dogs and cats may not seem the most compatible of species, although you probably know of at least one animal-loving household with both pets.

Relationship problems between family animals are often presented to behaviour consultants. But more often people put up with their cats hiding in the basement or some other area of the house because they’re scared of the new dog. This is not a good quality of life for any animal. Chronic stress caused by harassment from another animal can lead to illness.

Many of these problems could be prevented with just two steps:
•    A thoughtful assessment of the animals’ personalities
•    Careful initial introductions

Assess your animal
Has your resident cat or dog ever been around the other species? How did they react? A good relationship with a previous dog or cat is a good sign, but this doesn’t guarantee the same results with a new one. Your new animal will behave differently than the previous one did. How about the dog or cat you are thinking of acquiring? Are they known to be friendly to the other species? You should err on the side of caution, even if you’ve been told or know the dog was friendly with other cats in the past. This is even more important if the dog’s history with cats is unknown. Regardless of which species you are adding to your household, each will be unfamiliar with the other and neither may respond the same way they did to previous animals they were well acquainted with.

Anticipate problems
Most cats will be afraid of dogs. There are rare exceptions. A dog’s reactions usually fall into several categories. Some immediately view cats as prey and will chase them with intent to hurt them. Many will be intensely curious about the cat. That curiosity can turn into playful, friendly behaviour, or aggression, depending in part on the cat’s response. The dog may start out just wanting to play, but the cat feels threatened and behaves aggressively. This may in turn provoke an aggressive response from the dog. A few dogs will immediately love the cat and be calm and relaxed in her presence. And a few will be afraid of the cat. When dogs and cats don’t get along, it usually has nothing to do with territory. More likely, one is afraid of the other, resulting in defensive aggression, or the dog sees the cat as prey. In some cases, it can be difficult to determine at first what the dog’s intentions are.

An introduction protocol
The initial introduction should be a positive experience for all the animals. At all times, your over-riding concern must be for their safety. When your animals can’t be supervised, they should be housed separately. The goal during the introduction is to help your animals become familiar with each other in small doses. Familiarity leads to friendship. Dogs and cats can co-exist, but it is vital to go about it the right way for everyone’s safety.
•    Allow them to hear and smell each other, but not see each other. Confine the resident animal to one part of your house when you first bring your new dog or cat home. Allow the newcomer to explore his new digs while your resident animal is safely confined.
•    During this time, take an old towel, rub it on your new dog or cat, and put it in the room where you’ve confined your resident animal. This is the first step in getting them accustomed to one another.
•    After an hour or two, reverse the arrangements, including the scented towel. Repeat this process throughout the first day, and during the entire time your animals are housed separately during the acclimation period.
•    Feed the animals on either side of a closed door (one they can’t see through) so they will learn to associate pleasant experiences with one another. Your goal is to have the animals calmly eat with the bowls very close to the door. This may take several days to achieve.
•    Continue keeping them separated until their interest in each other’s scent and presence at the door wanes. Next, arrange an episode where they can see but not touch one another. This might be through a glass or screen door, or on either side of a barrier gate, or with your animals on leashes or in crates.
•    Encourage the animals to lie or sit quietly, using treats, toys and/or petting. If anyone seems uncomfortable or overly excited, either increase the distance between them, or calmly end the session and try again later.
•    Continue to gradually increase the time your dog and cat can see one another, and decrease the distance between them, though not necessarily during the same session.
•    Once they are all relaxed, allow a bit more interaction. Attach your dog’s leash to a couch or chair, for example, and allow the cat to approach him at their own pace. Interrupt over-exuberant or aggressive behaviour with a squirt of water. You must prevent your dog from developing the habit of chasing, harassing or threatening your cat. In turn, the cat must learn to trust that the dog isn’t going to harm them.

Cats and dogs vary as to how quickly they move through this introduction phase. Some may accept one another within just a few days, while others may take weeks or months to tolerate one another.  Micro-managing these introductions and moving at a snail’s pace is the key. Moving too quickly and allowing any of your animals to become fearful or aggressive can put them back weeks.