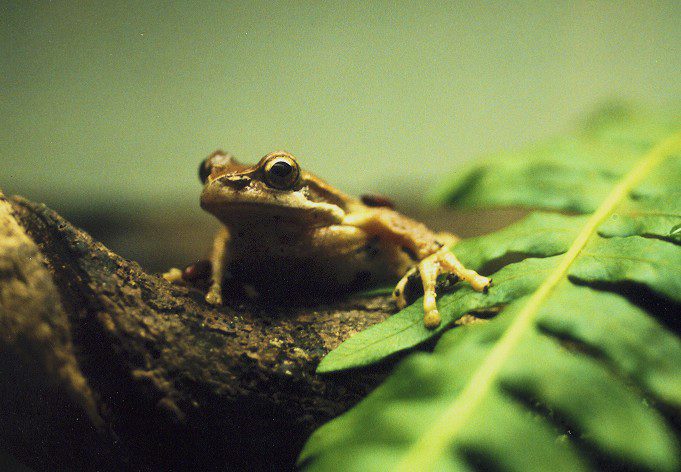 Australian scientists think they may have the answer to what has been mysteriously mass killing our frogs over the past twenty years – an aquatic chytrid fungi, yet to be named. So far, 10 different species of frog, covering four States have now succumbed and departed because of this deadly disease.

Intensive studies began two decades ago in Queensland, when scientists from the James Cook University (JCU)  in Townsville found entire frog populations within pristine tropical rainforest habitats were mysteriously collapsing. To date fourteen species of frog have suffered population crashes, at least two are believed to be extinct, and five others have simply disappeared from their natural habitats. All possibilities were investigated, including the presence of pollutants, increases in Ultra-Violet radiation, and climatic changes. In 1993 a suspect fungi was found in the wild forests near Cook Town, north Queensland.

Three years ago Dr Lee Berger and Dr Alex Hyatt from the Australian Animal Health Laboratory (AAHL) of the CSIRO in Geelong, and Dr Rick Speare from the JCU began investigating the issue. Specimens were sent in for postmortems. Pathology examinations detected no specific internal lesions, but there were indications of the presence of chytrid fungi in the skin of the dead frogs. As more and more samples were accumulated from different states, it was confirmed that all had the fungi present in their skin. Tests were then undertaken on specimens retrieved from earlier population crashes, the fungi featuring significantly in nearly all cases.

And it wasn’t just happening in the pristine rainforest areas of North Queensland. The chytrid fungi has also been detected in frogs from semi-rural areas, suburban areas, and in captive bred populations. The disease is not endemic to Queensland either, but has been found in New South Wales, Victoria and South Australia. So far it has effected ten different species of frog – as well as the Cane Toad (but seemingly only in juveniles). There have also been similar epidemics of mass mortalities of frogs in the rainforests in both Central and South America, and in the UK.

The source of this new aquatic chytrid fungi is still under scrutiny. Although other types of chytrid fungi live freely in water or soil, and some are parasites to plants and insects, it has not  previously been observed parasitising amphibians. As most frogs dwell in or around streams, they are at high risk of picking up the water-born disease on their skin. A frogs skin is an important player in the sheer act of its staying alive, as they use it to both drink and breathe through.

Under controlled conditions within laboratory walls at the AAHL, the fungi was introduced to adult frogs. Once the animal had become infected with the disease, it’s decline was rapid. It’s joints would become red, the skin surface degenerated, peeling and lifting off the frogs back as the keratin layer become thick, irregular and broken. It effected nearly every cell on the frogs body. Death was inescapable. The frogs were thus humanely euthanased. It was noted then that no individual frog in captivity survived once a group had contracted the disease, surmising that the fungi is contact transmissible.

Observations have indicated that even though populations of adult frogs have been decimated by the disease, it does not result in the death of tadpoles. Further study has shown that the fungi thrives by digesting the keratin found in the adult frogs skin. Tadpoles, in contrast, do not have this protection of keratin, so even though they may carry the host disease within their mouth parts, it seems to have no detrimental effect upon them until they metamorphose. Young frogs were found to be dying out within 2-3 weeks of this transformation taking place.

In some instances, it would seem certain species of frog are less susceptible to the disease than others. An example being the Rocky River Frog Litoria lesuri. During 1994 to 1996, research showed a healthy population in the hundreds for this frog. When scientists started to notice the population disappearing in March 1996, it was thought that Trout were their main adversary. Both juvenile and adult frogs were collected and taken back for captive breeding for repopulating purposes. Unknowingly, so to was the disease, with only half of those collected surviving. And yet this robust population of frog seems to have recovered after the disease has passed through their habitat.

But those who are most prone to infection, are the frogs who have a restricted range and/or which are highly specialised. The fungi could then be the secondary factor, alongside other environmental stresses, such as habitat disturbance and  introduced species (such as trout) tipping the species over the edge towards extinction. One example is that of the Endangered Spotted Tree Frog Litoria spenceri, a river breeding specialist. Prior to 1991 this frog could be found habituating 12 river systems in north eastern Victoria and  southern New South Wales. In 1993 scientists were pleased to find a large population at Bogong Creek, New South Wales. But during the annual 1996/1997 surveys, the frogs had all but disappeared from eight of the known stream sites, including 97% of the population found at Bogong Creek.

There are many hypothesis as to how and where this aquatic fungi came from. One is that the disease is a recent introduction to Australia, and that our resident frogs have no immunity to it. Whether it has come from overseas, or simply from another part of Australia – brings to the surface, once again, the issue of importing foreign species, such as ornamental fish. The Australian Quarantine and Inspection Service have estimated that 6.5 million ornamental fish have been imported into Australia, one third of those coming directly from Singapore.

Another is that it is an emerging disease – coming from a disturbed habitat, the fungi has simply switched hosts (similar to the Ebola disease). Or is it a natural occurrence, which under normal circumstances would not be a life-threatening disease, but alongside hazards such as pollutants, drought, and environmental change, the fungi in more than the frog can manage to survive against.

So is the answer in scientists trying to breed fungi-resistant frogs? Or will this just cause a genetic bottleneck? Although scientists know the fungi reproduces in water, what they don’t know is just how long it stays there. This makes any future re-introductions of frog populations back into that area a risk. As a conservative measure, scientists at AAHL are presently trying to cultivate the fungi, aiming at treating the tadpoles that carry the disease. While this may be practical in a captive breeding situation, it does not seem to be viable in wild populations.

So we’re back to that old evolution theory of natural selection – survival of the fittest, and are we the ones to dictate which species that aspires to? Reports from the US suggest the same fungi in frogs has been in existence in many zoos since as early as 1988. Should we then be asking ourselves why has this (as many others have) disease manifested itself now? As the scientists will say ‘Its all just a matter of speculation’.