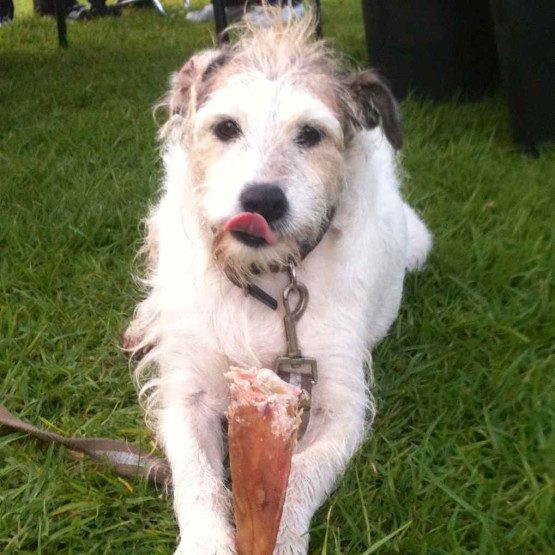 Why Do Dogs Lick? For the most part, dogs are licking for the very reason you think they are, to show affection. However, affection licking is commonly confused with other reasons, some of which may surprise you.

Dogs are known for licking. It is one of the first survival skills they learn and is a basic instinct with many purposes and meanings. Their targets can be their humans, other animal companions, themselves, food, and even inanimate objects.

Canine Communication – We know that dogs lick people, themselves, and other objects, but why other dogs? Licking is an important means of communication between canines. Puppies lick their mothers as a way of requesting food. Licking another dog’s mouth can be a sign of respect and submission and helps establish pack structure. Many times though, dogs lick each other as way of requesting friendship, grooming, and showing affection.

Tasty Surfaces – You may think your dog is licking you to say he loves you, but in reality, it may be as simple as he likes the way you taste. Even a meniscal amount of food on your hands or face may be too much to resist. Dogs are also attracted to the salt on human skin, as well as any new scents that we carry. An unfamiliar smell on a dog’s person may be worthy of investigating with a sniff and then a lick. This can provide immense information about where you have been.

Attention Seeking – You missed the hard stare he was giving you. You disregarded the nose nudge and tap of his paw. He wants your attention but he knows barking has proven counter productive in the past. At this point, he may have to revert to licking your hand, arm, or going straight for your face to get your attention. Next time, take notice to see if there is something your dog is trying to tell you. Is the water bowl empty? Does he need a potty break? Or, he may simply just be bored and want to play.

Stress Relief – Licking can be a self-soothing behaviour. It is thought to release endorphins and offer a means for reducing stress. Dogs may lick humans, themselves, or objects just because it is a relaxing and soothing way to pass the time. If a dog is nervous, he may lick or smack his own lips as way of calming his nerves or letting another dog know he is not a threat.

Injury and Pain – Wound licking is an instinctive behaviour in many animals. Saliva contains bacteria killing enzymes and the force of licking can remove debris and dead tissue, promoting healing in some cases. However, excessive licking can cause an area to become raw and create open sores, actually worsening a wound and causing infection. Allergies are also a very common reason for dogs to lick, especially at their feet and paw pads. Some sources of pain are deep within the tissues or joints, but a dog might still lick the surface at an attempt to locate and treat the source.

Self Cleaning – Cats are not the only species that get credit for good hygiene. Dogs also lick themselves as a way of grooming. Some breeds of dogs are known for having impeccable grooming habits, such as the Vizsla, the Shiba Inu and Chihuahua.

Obsessive Behaviour – When licking becomes repetitive or obsessive, that can indicate a problem. For example, what may have started out as licking a tasty part of the couch can turn into an obsessive-compulsive behaviour for some anxiety prone dogs. Constant licking can quickly become a learned behaviour for coping with chronic stress. A dog might incessantly lick furniture, toys, people, and even themselves. When it is an obsessive behaviour, it is the opposite of a stress reducer and may require behaviour modification and possibly medical intervention.

By learning more about this natural behaviour, one can better understand dogs and their needs.