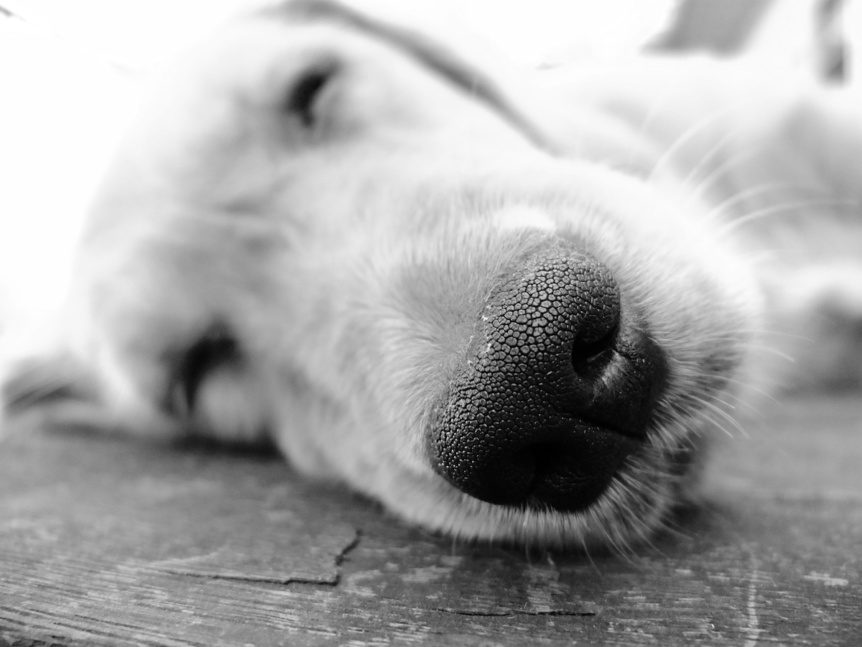 Dogs rely on their sense of smell to interpret their world around them – similar to the way humans depend on their sight for everyday activities. A dog’s nose works by interpreting as much information as a pair of human eyes.

A dog’s nose nose works by smelling an object or another animal, which allows them to process more information, beyond the visual. The percentage of the dog’s brain that is devoted to analysing smells is 40 times larger than that of a human. Dogs can identify smells between 1,000 to 10,000 times better than humans can.

As the dog catches fresh air, their nose helps capture any scents which the breeze carries. Each scent helps to determine the direction of the source of the smell. The dog will start to become aware of not just what kind of things are out there, but also where else they’re located around the surrounding area.

As the air enters, a dog’s nose separates the air into two separate flows, one for breathing and one just for smelling. This second airflow enters a region filled with highly specialised scent receptor cells, creating swirls of air that helps to draw in new odour molecules, allowing different odours to build up over multiple sniffs.

Humans have about 5 million cells dedicated to smelling alone; yet dogs have up to 300 million. Dogs also have four times the brain power devoted to processing and targeting scents. For example, we smell a ‘lamb stew,’ but a dog can smell each of the individual ingredients in that stew.

Over the years, humans have grown to realise the importance of the dog’s highly developed sense of smell and have employed dogs for many important tasks. It is not uncommon to hear of specially trained dogs working in the areas of search and rescue, bomb-sniffing, drug- sniffing, weapons-sniffing, and detection of contraband food products. In addition, dogs have been used in homes to detect hazardous mould and locate termite infestations. Researchers have also discovered that dogs are able to detect some forms of cancer in humans, specifically, melanoma-types.

It is often said that a warm dry nose is a sign of illness; however, this is not always the case. Over the course of the day, a dogs nose can range from cool and wet to dry and warm, and all are normal. If a dog exhibits other symptoms, such as changes in colour (pigment loss) or changes in texture (flaky, cracked, lesions) the nose should be examined by a veterinarian.

1. Bloodhound
This giant hound has 300 million scent receptors — more than any other breed. He is famed for his man-trailing abilities and is so reliable his evidence is admitted in court. Bloodhounds can not only follow a scent on the ground, they can also air scent. They are built to be the perfect tracking dog, with a large, long head; a nose with large, open nostrils; long ears that sweep the scent upward from the ground; and a cape of loose skin around the head and neck to trap and retain the scent. Last but not least, the Bloodhound’s stamina and persistence make him a superior trailing dog.

2. Basset Hound
Of French origin, the Basset is built to follow a scent trail. He’s low to the ground and his long, heavy ears sweep the ground, bringing scent upward to his powerful nose. The loose skin beneath his chin, known as a dewlap, helps to trap the scent, keeping it easily accessible as he works.

3. Beagle
Many of the merry little hounds follow air and ground scent. The Beagle’s scenting ability makes him popular not only with hunters but also to detect contraband (especially food items) in airports. Beagles who have been on the job for a while have a 90% success rate, recognising nearly 50 distinct odours.

4. German Shepherd
This well-known herding breed is said to have 225 million scent receptors in his nose. One of the things he’s known for is his ability to air-scent, rather than keeping his nose to the ground, he casts about for human scent that is carried by the wind. German Shepherds are highly versatile and many are employed by police, military and search and rescue groups.

5. Labrador Retriever
One of the worlds most popular breeds, besides being a great companion dog, he is best known for his fine nose. Labs are found working in many scent-related jobs, from arson, drug and bomb detection to search and rescue.

6. Belgian Malinois
Commonly employed by police and military forces and as search and rescue dogs, this breed is well known for his keen sense of smell. Among the breed’s talents are the ability to sniff out explosives, prostate cancer and cheetah scat.

7. English Springer Spaniel
This popular sporting dog comes in two types — field-bred and show-bred. Field-type Springers are highly prized by hunters for their good nose, which is liver-colored or black with broad nostrils. English Springers have been trained to detect such diverse odours as explosives, narcotics, fake currency, bee hives, and human remain