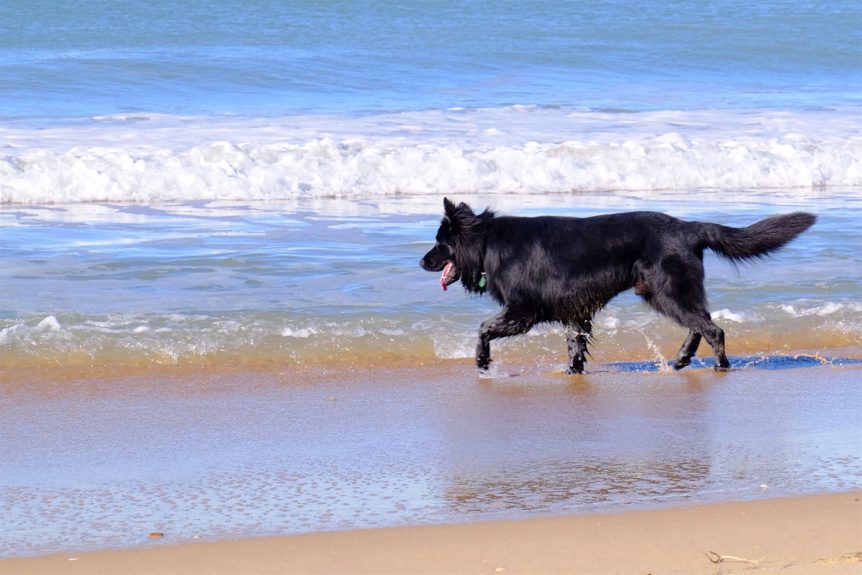 Unfortunately, our dogs can’t tell us how they are feeling, but by reading their body language you can get a pretty good idea.

You recognise your dog barking as you return home as a joyful greeting, if he whines whilst you’re eating, you know he wants to share, but do you know how to read his body language?

Body language is a huge part of canine communication. A dog’s stance and bearing, the position of his ears, head and tail are all signals to the outside world about how he’s feeling. By learning how to recognise and interpret these signs, you’ll be able to better understand and bond with your dog.

Play Play amongst dogs is the way they learn. As you watch dogs at play, you’ll notice that even if they’re rough, they’re fairly relaxed. Their mouths are open and the eyes relaxed. Lips are down, covering their teeth, not drawn back in a snarl. There are no threatening stares. Barks are often higher pitched than the deeper warning or ‘I’m scared’ bark.

Confidence A confident dog is a relaxed dog. Their stand is erect, tail up with a slow sweeping wag. Every muscle in their body is relaxed and they have a bounce in their step. Their stance won’t change even when another dog approaches or sniffs their behind.

Fear Fear is shown by a lowered stance with the tail down or tucked under the bottom. Sometimes the tail will do a quick, frantic wag. They may bark out of fear to warn whatever is there to stay away. This barking can become intense if they’re fenced in, on a leash or cornered.

Often fear will arouse a dog and their hair will stand on end on the ‘hackles’, the area over the shoulders and just in front of the tail. This show of fear or uncertainty does not mean they’ll become aggressive, but it is a warning that they’re on high alert and ready to defend or attack.

Dominance Alpha dogs have a very calm way of showing their dominance. Standing tall is one. Another is by putting their head or paw over another dog’s shoulders. They might accept a lick on the mouth. A few dominant dogs will roll onto their backs to expose their bellies; this reassures a shyer dog, but they will still look the other dog in the eye from this position.

Submission A submissive dog will lower their head and allow other dogs to stand over them. They may lick another dog’s lips and mouth while looking away, or roll onto their back with their head pointed away from the other dog. Their tail will most likely be between their legs. There is nothing wrong with a submissive dog; as with people, there are leaders and non-leaders.

Take some time to observe your dog as he goes through his daily routine. Look at their body as they play, relax, respond to new situations and relate to others.

Stress Dogs can get stressed in many different situations but usually it’s through frustration or fear. Signs of stress are dilated pupils, rapid panting, lowered tail, ‘submissive’ urination, whining, shaking, scratching, sniffing, turning the head away or ‘fence barking’. Many leashed dogs are frustrated because they can’t run, while dogs in kennels are frustrated because they can’t get out.

Calmness Because dogs are pack animals, they have developed ways of diffusing and even avoiding conflict and aggression. Calming signs include yawning, looking away, lip-licking, circling, lying down calmly and even ‘shaking’ off tension. The shaking looks the same as if the dog were wet and trying to get the water off, but in this case they’re shaking off the tension. Many small dogs ‘shake’ to get rid of tension or stress when they are out in public or feel out of place.

Aggression Watch your dog’s body. A stiff, tense body and legs mean aggression when they’re coupled with a lowered head and laid-back ears, an intense stare, snarling lips and raised ‘hackles’. An aggressive or angry dog will also have their tail straight out behind them.

Dog to dog When two dogs meet, the general rule of thumb is to let them decide what is and isn’t appropriate. Butt-sniffing, rough play and barking in each other’s ears may not be acceptable to humans, but are perfectly normal in the canine world.

However, if your dog’s actions are annoying, scaring or angering another dog, it’s up to you to do something about it. Take them away from the action for some light-hearted calming time.

If you find your dog has a number of aggressive encounters with other dogs, stop and observe their body language. Are they getting ‘in the face’ of the other dog, or failing to respond to his/her submissive or calming signals?

Remember that your dog can feel your emotions. If you’re unsure about another dog, they’ll be unsure too. Keep your feelings in check when another dog approaches. Be the alpha leader and your dog will respond better.

It’s our responsibility to make sure our dogs are safe. Studying their body language can help you pick up on what they’re  feeling and saying,  before they start to bark or growl.

By tuning in to their body language, you’ll gain a much better understanding of the canine mind and emotions, and that will greatly enhance your bond.