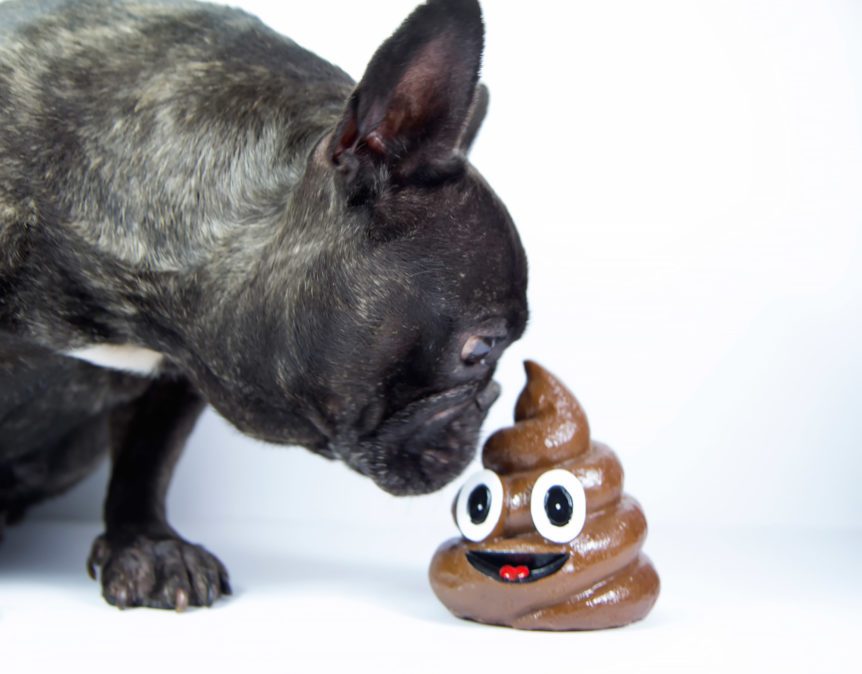 It’s always a good idea to inspect a dog’s stool to see if there is anything unusual or alarming in it. Your dog’s poop can tell you many things, such as what they ate, if they have parasites, if they’re stressed, or if they’re suffering from some form of digestive disorder.

When inspecting your dog’s poop, were you surprised to see mucus or something that looked like jelly? The presence of mucus is actually quite normal. It’s common to see a little bit of a slimy, jelly-like substance in your dog’s stool. Glands in the intestinal tract naturally produce mucus to help keep the colon lubricated and moist to help the stools pass along. However, excessive mucus accompanied by blood in the stool, diarrhoea, vomiting and/or other symptoms is a cause for concern.

Normal mucus often looks like a clear jelly-like substance mixed within the stool, but, sometimes, it may envelop the stool like a sausage casing. In some cases, the mucus may also appear white. If you make it a habit to routinely inspect your dog’s stools, you’ll quickly note when something looks off.

If your dog is pooping blood, but is acting normal, then it is likely caused by a sudden change in your dog’s diet, stress, food intolerance, or dietary indiscretion.

Other serious causes of blood in dog stool include parvovirus, hemorrhagic gastroenteritis, and intestinal parasites, which must be diagnosed by a veterinarian. If the blood is fresh and bright red, it is derived from the colon or rectum. If you see tarry stool, then the cause is likely originating in the upper small intestine. Call a vet immediately if you see blood along with symptoms of vomiting, chronic diarrhoea, dehydration, and/or lethargy.

Mucus Becomes a Concern When:
•There is an excessive amount
•Blood is present
•There is vomiting, diarrhea, lethargy, and/or loss of appetite

Diet: Sometimes switching to a highly digestible diet or adding additional fiber to the diet will help dogs with mucus in the stool. Boiled white chicken chicken (no skin or bones), with rice, and a teaspoon – tablespoon (depending on the size of the dog) of canned pumpkin is a good, homemade option that can be safely fed for a few days.

What Does It Mean?
An increase in mucus is often a symptom of irritable bowel syndrome (IBS), which is an irritation and possible inflammation of the colon or large intestine. When irritated, the intestinal tract decides to create an extra layer of protective mucous lining. Dogs with irritable bowel syndrome will have the urge to defecate frequently and will pass semi-formed feaces or runny stools with small amounts of bright, red blood at the end and/or excessive mucus.

Some potential causes of irritable bowel syndrome:
1. Stress
Believe it or not, a dog’s mental and emotional state could have a great impact on his bowel movement. Like humans, dogs under stress or anxiety will have diarrhoea, which may include large amounts of mucus and some blood. Other symptoms include having the urge to go frequently or straining when defecating. If your dog strains and nothing comes out, then it may simply be stress, which gives him the urge to go despite having an empty colon. This is not to be confused with constipation. Most likely, the straining happens after your dog has already defecated several times. Diarrhoea due to stress should resolve itself within 24-48 hours, but call a vet if it does not.
2. Dietary Indiscretion
If your dog is a dumpster diver or a counter surfer, then they probably ate something bad that gave them an upset stomach. This can be easily remedied with a bland diet or slippery elm bark.
3. Food Intolerances
Allergies or intolerances to food will cause an upset stomach that may result in vomiting, flatulence or diarrhoea. Common food culprits include dairy, undercooked eggs, raw meat or bones, or fried or greasy foods. Chronic diarrhoea may also be a result of eating foods that are toxic to dogs.
4. Intoxication
If you suspect that you dog has ingested poison or toxic foods, such as chocolate, gum, or grapes/raisins, then symptoms of vomiting and chronic diarrhoea will occur along with more serious signs of poisoning, such as wobbly gait, fatigue, fainting, and seizures.
5. Recent Diet Changes
Did you recently switch to another brand of dog food? Sometimes mucus or liquid feaces is simply a sign that your dog’s digestive system is trying to adjust to a new diet. If this is the case, introduce the new food slowly by mixing in increasing amounts with some of his old food. If your dog is not experiencing severe diarrhoea or constipation and there is no sign of blood, then you can continue feeding the new food. Your dog should be able to adjust within a week’s time, and their stools should return to normal. If not, speak with your veterinarian. You may have to switch to a hypoallergenic food brand.
6. Inflammatory Bowel Disease (IBD)
Inflammatory bowel disease is a condition in which the the intestine is chronically attacked by inflammatory cells. The most common type of IBD is characterized by an infiltration of lymphocytes and plasmacytes cells. This is common in German Shepherd and Shar Pei dogs. The second most common form involves the eosinophils cell.
7. Crohn’s Disease
Also know as granulomatous colitis or regional enteritis, Crohn’s disease is a chronic form of IBD. The first symptoms of Crohn’s disease will be loose stool and a frequent urge to defecate. The stool may also contain bloody mucus. If the disease progresses, you will notice that your dog becoming a picky eater, losing his appetite, and losing weight.
8. Colitis
Large bowel diarrhoea is often associated with colitis. You may also see straining (not to be confused with constipation) and small amounts of blood and excessive amounts of mucus. Stress is usually the leading cause, but colitis could also be brought on by an infection or parasites.
Histiocytic ulcerative colitis is a rare disease in which ulcers line the colon and cause inflammation with periodic acid-Schiff (PAS) positive histiocytes. If your dog has ulcerative colitis, you will see a lot of blood in his stool.
9. Presence of Parasites/Protozoans
• Whipworms or tapeworms are parasites that live in the intestine and colon and cause severe irritation. They are some of the most pathogenic worms found in dogs and can be ingested via food, soil, or water. If this is the cause of your dog’s diarrhoea, you may be able to find whipworm eggs in the stool.
• Giardiasis is an intestinal infection caused by the protozan parasite, giardia. This parasite is usually ingested from another animal’s faeces, including human faeces. Dogs with giardiasis will exhibit foul-smelling diarrhoea that is watery, frothy, and contains a lot of mucus.

10. Fungal Infection
Histoplasmosis is a fungal infection that is contracted by eating or inhaling contaminated soil or bird droppings. Symptoms include loss of appetite and diarrhoea with straining.
11. Small Intestinal Bacterial Overgrowth (SIBO)
SIBO occurs when the dog’s body, for whatever reason, is unable to absorb raw food, so the bacteria already present in the dog’s intestine eats the undigested food and uses it as fuel to grow and overpopulate. This causes an imbalance of good colon bacteria. SIBO is commonly seen in dogs with exocrine pancreatic insufficiency (EPI). German Shepherds are overrepresented in those who suffer from this disease. Symptoms include yellow mucus, loose/soft stool, mucus coating on the stool, flatulence, chronic diarrhoea, crankiness, and lethargy.
If the mucus in your dog’s stools is caused by an imbalance of bacteria, a probiotic can help restore that balance.
12. Clostridial Enterotoxicosis
This disease is also characterized by an overgrowth of bacteria. The bacteria is usually acquired through raw meats and vegetables or decaying foods. Dogs with clostridial enteroxtoxicosis may experience diarrhoea with a shiny mucus coating, stomach discomfort, frequent and watery stools, and straining.
13. Parovirus
This is a highly contagious viral disease that attacks the intestinal tract. The symptoms of parvo are lethargy, sever vomiting, bloody diarrhoea, loss of appetite, and life-threatening dehydration. Puppies, adolescent dogs, and unvaccinated dogs are the most susceptible. Breeds at risk include Rottweilers, Dobermans, and German Shepherds.
14. Ingesting Foreign Objects
If your dog has an appetite for non-food items, it could explain why he has digestive problems. This medical condition is known as pica and could be a symptom of a greater problem, such as malnutrition. But, most of the time, it is just a bad habit that must be rid of through training. If you’re not sure whether your dog has swallowed something he shouldn’t have, check for signs of intestinal blockage.
15. Polyps and Tumors of the Intestinal Lining
If you see rectal bleeding, it may indicate that polyps or tumours have grown inside your dog’s intestinal lining or digestive tract. See a veterinarian as soon as possible if there is blood in the stool.

Treatment for Mucus in Dog Stool
Because some causes of mucus in stool can be serious, it’s best to see a vet, especially if the dog has other symptoms such as diarrhoea, vomiting, bloody stools, abdominal pain, fever, or lethargy. Seeing the vet is also useful because through diagnostic tests, he/she can most likely pinpoint the problem and provide you with a solution to prevent the problem from recurring.

Why You Should See a Vet
In the case of parasites, the appropriate dewormer should kill all parasites and take care of all the associated gastrointestinal problems. Surgery may be needed if there is intestinal blockage or a polyp. Dogs with food intolerance may benefit from a hypoallergenic diet and so forth.

When It’s Okay to Wait
In some cases, the episode of mucus in stool will be short lived, and the dog’s stool will return to normal after a few days. If it’s caused by a dietary indiscretion or a recent diet change, fasting and feeding a bland diet for a few days may help. Probiotics or yoghurts containing live culture are also helpful for replenishing helpful flora to the gut.
However, if your dog has other accompanying symptoms, and you suspect they might have gotten into something toxic, play it safe and see your vet promptly.

Regards Gary
Toggle the Widgetbar
Do NOT follow this link or you will be banned from the site!