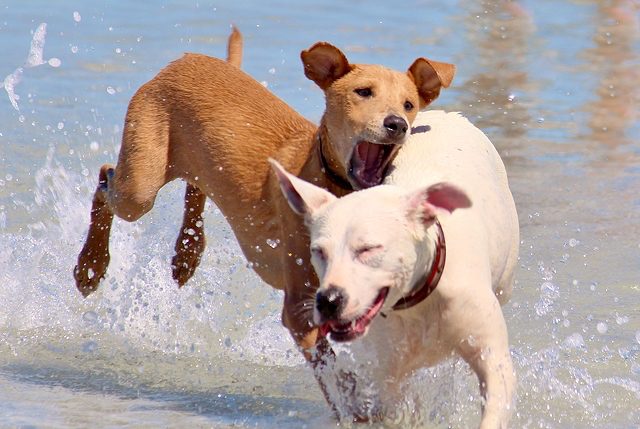 All too often, dog owners misread the language of dogs interacting with one another. Whether it’s incorrectly defining innocent play as dangerous fighting or taking too lightly what is actually aggressive behaviour, it is important to learn what dogs are saying to each other through their play.

Dog-to-dog play is a series of active and repetitive behaviours that have different meanings when performed in other contexts, but it helps dogs develop important life skills and experiences that promote good physical and mental health.

Because play relies on the ability to read vocal and body signals, dogs that do not have the opportunity to play are usually deficient when it comes to communicating and identifying these signals. Play is, after all, mock battle, so dogs that tend to play rudely, body slamming, mouthing too hard, mounting and generally causing mayhem can provoke negative reactions in others.

• Most young dogs learn how to play from their peers or their elders, but some, due to lack of social experience or because they are simply hardwired to be rude, do not back down.
• If a dog is pushy or plays too rough, the dog should not interact with other dogs until they learn to greet and play nicely.
• Teaching a reliable recall and calling the dog back before things get too rowdy will give them time to calm down before reintroducing them back into the group.
• Appropriate play sometimes looks rather rough, but human intervention is not usually needed.
• Conflict is avoided as long as each dog allows the other to win and lose the game. The more aroused dogs become, however, the more likely it is that a mock battle turns into something more serious.
• Good players are confident and actively seek out other dogs to play with, maintaining order during play by using clear signals so that other dogs do not become too aroused or overwhelmed.
• Play begins in puppyhood and helps puppies develop good coordination while allowing them to practice a series of exaggerated behaviours that promote social ease.

Most dogs play safely with each other by relying on a series of cut off signals that communicate their peaceful intentions. Play bows, and displacement behaviours such as sniffing, sneezing, yawning, itching and licking occur for brief moments throughout play to communicate that any future action is still just play.

How Do Dogs Signal They Want to Play?

In the field of animal behaviour, researchers often refer to social play as ‘play fighting’ because it includes many of the behaviours seen during real fights. For example, during play, one dog might chase and tackle another, or use a neck bite to force a partner to the ground. Dogs will also hip check or slam, mount, rear up, bite, stand over, sit on, bark, snarl, growl, bare their teeth and do chin-overs (i.e., place the underside of their chin over the neck of their partner). However, despite the overlap in behaviours, some clear differences exist between play fighting and real fighting. When playing, dogs inhibit the force of their bites and sometimes voluntarily give their partner a competitive advantage (self-handicap) by, for example, rolling on their backs or letting themselves be caught during a chase — behaviours that would never happen during real fighting.

In addition to inhibited bites and self-handicapping, dogs clearly set the boundaries of play by employing signals, such as play bows (ie: putting the front half of the body on the ground while keeping the rear half up in the air) and exaggerated, bouncy movements.

For many dogs, play fighting is the primary method used to negotiate new relationships and develop lasting friendships. Although play is fun, it also offers serious opportunities to communicate with another dog. In this sense, play is a kind of language. Thus, when we regularly break up what we consider ‘inappropriate’ play, are we doing our dogs a service, or confusing them by constantly butting into their private conversations? Most importantly, how can we tell the difference?

First, we need to determine whether both dogs are enjoying themselves and want to continue playing. Look at their postures and facial expressions. Their movements may be light, bouncy and exaggerated and they may have relaxed, open mouths. Watch for play signals, which can often be quite subtle — a quick dip or bounce rather than a full-blown play bow. If you’re not certain that a dog really wants to be playing, try briefly holding that dog back. If they presses their body into yours and avoid looking at the other dog, they’re showing relief at the interruption and you should help them to avoid the other dog. If they pull against your grip in an attempt to interact with the other dog, release them. If they run toward the other dog or direct a play signal in their direction, then they are saying that they want to keep playing.

Play does not necessarily have to be fair or balanced in order for two dogs to want to play with one another.

Although its recommended to carefully monitor play between dogs who are significantly different in size or age, or who do not know each other well, studies have shown that dogs are very good at figuring out which dogs they want to play with, and how to play well with their friends.

Social Dog Play
Social skills are honed by playful interactions between individuals. One pup may jump on another pup, pin him, and then mouth him around the head and neck. If the pressure of the pup’s bite exceeds tolerable limits, the temporary underdog will roll over, yelp or run away. Both parties learn an important lesson. The biter learns to inhibit his bite if he wishes the fun to continue, and the pup that is bitten, learns that deference or escape will cause the unpleasant experience to come to an end. Of course, sudden role reversal is also a feature of play, with provisional subordinates suddenly becoming the pursuers and ‘attackers.’ A happy medium is reached when truly dominant dogs learn their gift for mastery, and subordinates learn how to avoid or deter unpleasant exchanges. This dynamic may explain why dominant dogs are less successful than their subordinates in soliciting play. Aloof pups that don’t play much, and orphaned pups, often grow up to be socially inappropriate. In repelling borders, they may send a message that is too severe, failing to inhibit their bite – and they may not be able to deliver convincing messages of submission.

Predatory Dog Play
Chasing moving objects is a sure way of fine-tuning predatory skills. Ball chasing, stick chasing, and leaf chasing, are all ways in which this play form is expressed. With appropriate opportunity and guidance, pups will learn the ins and outs of the chase – how to accelerate, turn on a dime, brake suddenly, and how to pounce with accuracy and alacrity. If deprived of play predatory opportunities, dogs may resort to vacuum chasing of imaginary creatures, may pace, circle, or chase their own tails. This is a sad state of affairs.

Oral Dog Play
Young puppies have a biological need to mouth and chew malleable objects. It seems to give them almost undue pleasure. Unlike social and sexual play, this type of play does not require a partner, though socially-testing tug-of-war games sometimes evolve as a spin off. Of course, by teething time, at around 6 to 8 months of age, object chewing becomes an extremely useful adjuvant to assist with tooth loosening and dental eruption, and may even provide some relief from gingival discomfort.

Sexual Dog Play
This usually takes the form of mounting, clasping and pelvic thrusting (humping). The lack of seriousness is indicated by the somewhat haphazard orientation of this behaviour, initially. Male and female pups are equally likely to be targeted, or in their absence, peoples’ legs and cushions may have to suffice. Dogs that have had no humping experience will not be as immediately successful in mating as previously rehearsed counterparts. Also, dogs without playmates may imprint on inanimate objects or human appendages as substrates for humping behaviour, and become an embarrassment to own if not neutered. In addition, the relationship between humping and dominance must be born in mind if the correct human-companion animal relationship is to be preserved.

Sometimes people can influence dogs to behave in a rough manner, especially if they themselves are using their hands, arms, or legs while playing with the dog. It is recommended that you behave in a gentle manner with your dog and use toys to play with them instead of your body. Some of this behaviour is learned from other dogs that play roughly in general or from dogs that are larger than your dog. If you notice that this behaviour may be influenced by another person or dog, then cease the activity between the two parties.

The beauty of play is that for most dogs the desire to interact with others in such a manner continues into adulthood. Play works well when both dogs know the rules, maintain a low level of arousal and are willing to win and lose the game. Play might become quite vocal and this is usually ok unless the level of vocalisations increase and/or one dog is giving appeasement signals and trying to get away. If the other dog recognises these signals and backs off, there is a good understanding between players, but if the signals are ignored, human intervention is usually needed. Understanding how dogs play ensures that play remains a fun and healthy activity for everyone.

'We recently purchased some Dog Treats from the market and they were a huge hit with Jake, our spoilt dog.'

Ian, Jo and Jake
Toggle the Widgetbar
Do NOT follow this link or you will be banned from the site!