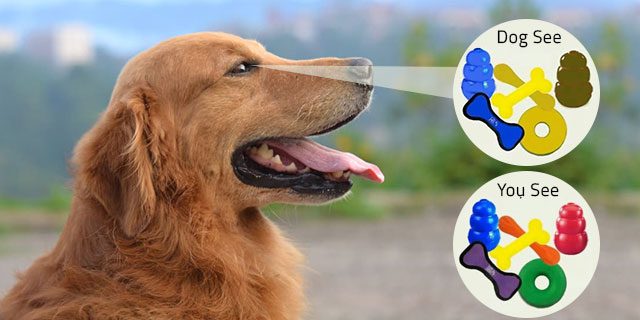 Contrary to popular belief, dogs can see colour too. Although early research suggested that dogs were unable to perceive colour – noting that dogs only saw in black and white, turns out to be nothing more than a myth.

A dog’s vision and the way it sees the world depends on several factors:
• Ability to measure distances (visual field and depth perception): the position of the eyes in an animal’s head determines peripheral vision and the amount of visual field that the dog can observe with both eyes. This is known as binocular vision. It allows them to see in depth and measure distances correctly. A dog’s field of vision is 240º, while ours is 200º. Contrarily, the binocular vision of humans is superior to a dog’s.
• Ability to focus on objects (visual sharpness): this ability allows them to focus on different objects and tell the difference between one from the other. The cornea and lens are responsible for this ability.
• Perception of movement: dogs have a very sensitive vision to movement. There are even studies that reveal that they can detect moving objects or animals up to 800 meters.
• Telling colours apart: cones are cells that are found in the retina, which determine the perception of colours, as long as they are stimulated by the light of different wavelengths.

“Colour vision is possible due to specialised types of photoreceptor cells in the retina called cones. When these cells are stimulated, they transmit a signal to the brain, which is perceived as a particular colour. Humans possess three types of cones. On the other hand, dogs possess two types of cones, so their ability to perceive colours is limited compared to humans.” says Dr. Shelby Reinstein, a veterinary ophthalmologist at Veterinary Specialty and Emergency Center in Pennsylvania.

Humans have blue, red, and green cones, whereas dogs have a blue cone and a visual pigment that falls between a human red and green, describes Dr. Gustave Aguire, professor of medical genetics and ophthalmology at PennVet. “The eye really is complex, and the retina is an extremely beautifully organised structure meant for capturing light,” he says.

Dogs see the colours of the world as basically yellow, blue, and grey.

So what exactly is your dog seeing down at the dog park? Even without being able to interpret every hue, it isn’t all that different from yours—especially if you experience a form of colour blindness. “Dog colour vision is quite similar to a person who has red-green colour blindness,” explains Reinstein. “Dogs see shades of blue, yellow and green, which when combined, can be perceived as greyish brown, dark yellow, light yellow, greyish yellow, light blue and dark blue. This probably explains why dogs love chasing a bright yellow tennis ball on the green grass under the blue sky.”

Sight, of course, is much more complex – it’s not just about the colours of the rainbow, but the arc of the rainbow, the sharpness, the plane flying through it. While the human eye has advantages when it comes to perceiving some colours and fine detail, in other environments, canines have the upper hand. “While we do not think that dogs can focus as clearly on close objects, and therefore rely on smell and taste, we know that they are able to see better in dim light,” says Dr. Brady Beale, a clinical instructor of ophthalmology at the University of Pennsylvania’s PennVet. “They possess more rod photoreceptors for dim lighting in the middle of their retinas and have a tapetum lucidum that reflects light through the retina twice—we see this as dogs’ eyes shining in the dark.” Rods are also better at picking up movement than are cones. So, if your dog appears to be tracking something at a distance, particularly in dim light, pay attention!

“Even though a dog’s vision palette isn’t as vibrant as ours, their other senses are heightened,” adds petMD trainer Victoria Schade. Take, for instance, a dog’s keen sense of smell. Dr. Katy Nelson, veterinary expert for petMD, shares an example of smelling a bowl of salad. “We would smell the salad and maybe the salad dressing,” she says. “If a dog smells that same salad, he’s going to walk up and smell the tomatoes, and the cucumbers, and the specific type of lettuce, and anything else you put in there. He’s going to smell all of those individual smells.”

A dog’s visual memory is not as good as ours, as they prefer to remember through the senses of hearing and smell.

While researchers believe that all breeds perceive roughly the same spectrum of colours, other components of sight do vary depending on anatomy and size, which can differ wildly when it comes to dogs. “Certainly the perspective differs between a Great Dane and a Chihuahua,” says Beale. “Additionally, the position of the eyes on the head of the dog varies between breeds. If eyes are close together and a nose is relatively short, there will be a bigger overlap in the visual fields of the two eyes. This is called binocular vision, and larger overlap would provide more information for depth perception.”

So if you’ve been wondering whether dogs can see colours or if dogs can see in relative darkness, the answer is simple ‘Yes’. While their vision capabilities are slightly different than humans and they can see better in low light settings, dogs generally experience the world of sight in a similar way to us.

Strangely, the most popular colours for dog toys today are red or safety orange (the bright orange-red on traffic cones or safety vests). However red is difficult for dogs to see. It may appear as a very dark brownish grey or perhaps even a black. This means that that bright red dog toy that is so visible to you may often be difficult for your dog to see.

Keep this in mind when purchasing your next dog toys!

Cones
The retina (light-sensitive layer at the back of the eye) is made up of rods (designed for night vision) and cones. Given that the retina is a finite size, you can only have a finite amount of rods and cones. Human evolution favoured cones, so in daylight, we see in glorious technicolor, but we fumble around in the dark. Dogs, however, went down the other path: Their sight favours rods over cones. As a result, dogs see better in the dark than people, although not quite as well as cats. But colour vision is about more than the numbers of cones — it’s about how many types of cones. For example, people have 3 types of cone, whereas dogs have just 2.

'I purchased some 'Ezy Bones' from you at the market a few weeks ago for my dog Nelson. We are very happy with a natural alternative to the nasty chemical medicine he was taking. Thanks for making such a wonderful product!'

Paula & Nelson Youston
Toggle the Widgetbar
Do NOT follow this link or you will be banned from the site!