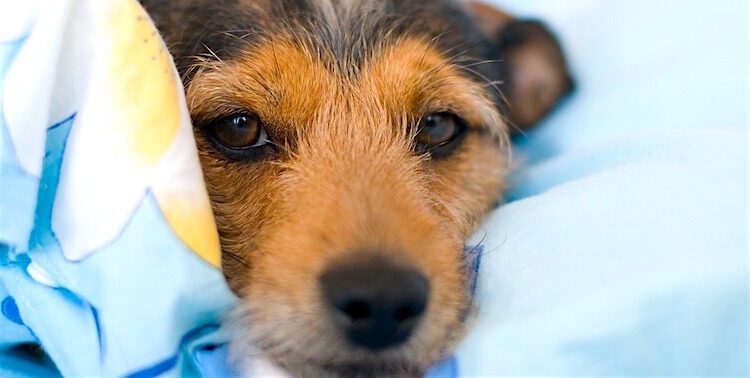 What is Meningitis?
Meningitis in dogs is an inflammatory disease that attacks the canine central nervous system. The term meningitis refers to an inflammation of the meninges, which are the three membranes that line and protect the brain and spinal cord.

Meningitis may also be non-infectious in nature, caused by an immune-mediated inflammatory response (in which the body’s immune system attacks its own tissues).

Symptoms of Meningitis
Meningitis symptoms in dogs tend to ‘wax and wane.’ In other words, the symptoms come and go over a few hours, days or sometimes even weeks.

Often the first sign is stiffness, with the dog walking like a living rocking horse, losing their appetite and crying in pain when their collar is put on. Neck pain is a classic sign in dogs, but with the added complication that a slipped disc looks similar. Thus a vet will need to run tests to check out what’s causing the neck pain.

It’s important to learn the symptoms of meningitis, so that it can be spotted early on. The prognosis is positive if the disease is diagnosed in its early stages.

Initial symptoms may include the following:
• Neck or back pain
• Stiffness in the spine, noticeable by your dog holding their neck or back rigid
• Muscle spasms in the back, neck, or forelegs
• Eyes tracking from side to side or up and down
• Sensitivity to touch
• Weakness
• Head tilting
• Unsteadiness while walking
• Depression
• Vomiting
• Loss of appetite
• Fever
• Low blood pressure

Serious symptoms that tend to occur if the disease progresses include:
• Blindness
• Dullness or stupor
• Severe unsteadiness or loss of muscle control
• Seizures
• Paralysis
• Confusion or disorientation
• Abnormal levels or aggression or agitation

If you see any of these symptoms in your dog, it’s vitally important that you make an appointment with a veterinarian. If meningitis is suspected, the vet will conduct a cerebrospinal fluid tap or even an MRI scan to check the inflammation of the meninges.

Causes of Meningitis
The main cause is usually another disease such as viruses, parasites, protozoan infections or poisonous mushrooms. Any health problems from another illness can also act as the ‘initial phase’ of meningitis.

Bodily toxins can also cause your dog to get meningitis (Eg: things like an infected bite or bacteria moving to their nose, ears, or any other infected part of the body).

Research has shown that meningitis can also be aseptic. This means there could be bacteria that you are unaware of which caused the disease. This normally affects younger dogs between 4-24 months old, but no matter what kind it is, never take meningitis lightly because it can be deadly.

It’s also possible that canine meningitis is idiopathic and the cause of it is unknown. Also, dog meningitis is not contagious to humans even though it’s similar to human meningitis.

Treatment of Meningitis
Some types of meningitis are treated using steroids, but antibiotics, anti-fungals, anti-parasitics, and other medications may be needed depending on the cause and severity of the meningitis. Hospitalisation with IV fluids and pain medication may be required in severe cases as well. Depending on the underlying reason for the disease, meningitis can be successfully treated, but unfortunately not all cases are treatable.

What is the Prognosis for Meningitis?
The prognosis for meningitis depends upon the underlying cause. Corticosteroid-responsive meningitis typically carries the best prognosis, while infectious and immune-mediated meningitis cases carry a guarded prognosis.

If your dog is acting oddly – especially if they have a stiff neck, it’s best to get them checked by a vet asap.