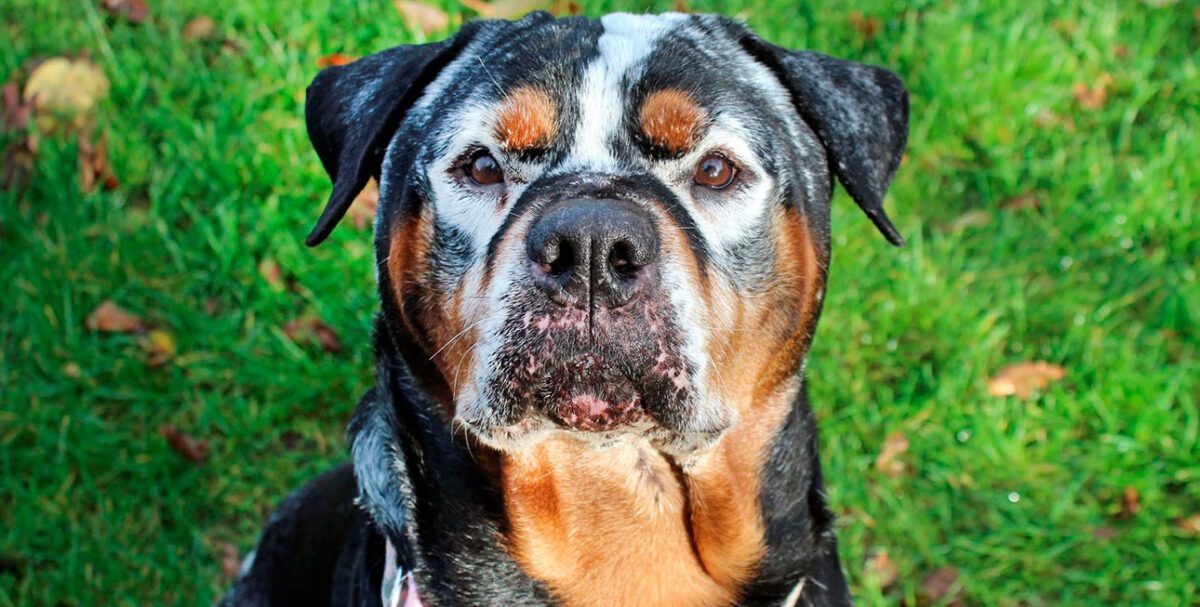 Vitiligo is an uncommon skin condition that causes skin to lose its natural pigment – a process called depigmentation. In addition to effecting the skin, vitiligo can also cause hair to turn white.

Although your dog or cat may start to look a little funny with patches of white skin and fur, there is no need to worry. Vitiligo is painless and won’t bother your pet at all.

Vitiligo is not contagious, and animals cannot pass it along by mere skin contact. Exposure to the disease does not pose any risks for contraction.

Causes of Vitiligo
The skin contains cells called melanocytes that produce melanin, the pigment that gives skin its colour. Vitiligo occurs when melanocytes are destroyed or die off.

Vitiligo in Dogs
Most cases of vitiligo in dogs are hereditary – although this doesn’t denote all other breeds are safe from the depigmentation disorder. Purebred dogs are more susceptible to get it than others as a hereditary disorder.

Vitiligo in Cats
Some felines also struggle with reduced melanin patches on their skin, hair colour and coat. The reasons for manifestation are the same as in their canine counterparts, and it doesn’t provide any sort of discomfort.

Siamese Cats have a fascinating distinctive coloration which is contingent upon outside temperature forces, makes them even more prone to the unpredictability of vitiligo. When anatomical structures of the Siamese Cat are cool, their fur goes darker. This colouring characteristic is a result of their partiality to albinism, rather than an indicator of vitiligo, however, this breed is more vulnerable to the latter for its skin sensitivity.

Symptoms of Vitiligo
In dogs and cats, vitiligo normally starts at a young age and progressively destroys melanocytes. As the melanocytes die off, the skin in the affected area turns white or pink. The fur covering the affected skin also turns white.

Vitiligo commonly affects the face first, particularly the nose. Other areas of the face that may lose pigment include lips, gums, ears, eyelids, and eyelashes.

Vitiligo can spreads beyond the face and affect the footpads as well as other parts of the body. The full extent of the spread, if any, will occur within three to six months of it first appearing. Once the affected areas turn white, they may stay that way, re-pigment, or even wax and wane.

Although vitiligo is more easily noticeable in black cats, it can affect cats of any colour.
Inflammation, skin lesions, and dander are rare in body areas affected by vitiligo.

Diagnosis of Vitiligo
If you notice your dog or cat’s fur is suddenly starting to turn white, take your pet to your veterinarian for further examination. It is important to determine if there is any underlying medical condition causing the depigmentation.

Take note of when you first noticed the vitiligo and where it first appeared on your pet’s body. Because stress may cause vitiligo, tell your vet if your pet has been more stressed than usual at home.

Diagnostic tests include taking a blood sample to rule out any medical causes of vitiligo. Skin scrapings from an affected area for checking under the microscope. A skin biopsy, which will show any lack of melanocytes in the affected areas.

Treatment and Management
Currently, there are no available treatments for vitiligo that will re-pigment your pet’s affected skin and fur. However, because vitiligo causes no discomfort, your dog or cat will be just fine living the rest of their life with this condition – they aren’t aware what has happened to them. It only changes your pet’s appearance, not their temperament.

Vitiligo vs. Albinism
Albinism is a congenital disorder that responds to the absence of skin and hair pigments. It results in the whitening of hair and gives pink colour to the eyes. But vitiligo is different from it in three aspects.
1. Vitiligo can attack at any time in your dog’s life span, while albinism comes with his birth.
2. In dogs, vitiligo occurs due to some factor that kills the actively working melanocytes, while albinism happens due to the inactivity of melanin-producing cells.
3. Vitiligo forms patches on your dog’s skin; in contrast, albinism results in depigmentation of the whole body.

Vitiligo vs. Pityriasis Versicolour
Both are two different skin diseases as:
1. After getting vitiligo, your dog’s skin remains smooth, but pityriasis results in the scaly appearance of the infected part.
2. Vitiligo in dogs mostly attacks near the mouth, fingers, groin, and armpits. However, it’s more likely to be pityriasis if it appears on the chest, neck, tummy area, or dog’s back.

Quick Recap:
• It may be genetic in some dogs — Vitiligo might be passed down from one dog to its offspring and is common in certain breeds like Rottweilers.
• There are two types — Focal vitiligo only affects one area of the dog, while generalised vitiligo will create bleached spots all over.
• Vitiligo isn’t harmful or painful — It doesn’t hurt your dog, nor does it cause any other health issues. There’s no way for vets to treat it, but your dog won’t be in discomfort or pain.