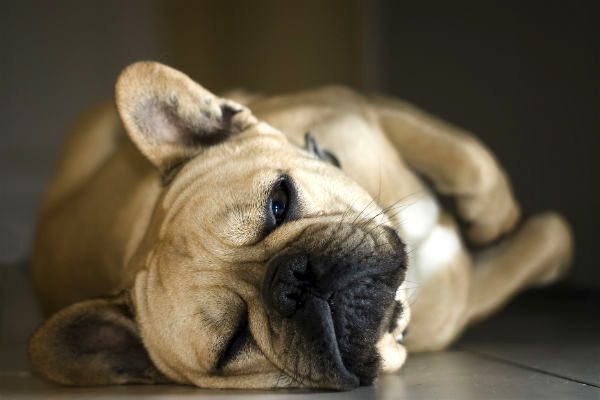 Bloat is a common condition that can be dangerous, even deadly. Dogs who have it need treatment right away. Know the signs so you can recognise when your pup needs help.

Bloat in dogs or gastric dilatation and volvulus (GDV), is a serious life-threatening condition where minutes really count. Bloat occurs when something goes wrong during digestion of food. Gases build up in the stomach so fast that the stomach blows up like a balloon, stretching the organ so much that normal circulation of blood to and from the heart is cutoff. The stretching itself and the lack of blood to the stomach’s cells can cause cell death, or necrosis. What makes it even worse and more immediately serious is when the stomach actually “twists and turns” (known as volvulus) at the top near the oesophagus and at the bottom of the stomach at the pyloric valve.

Any type of dog can suffer from bloat, but it mainly affects large deep-chested dogs, including Great Danes, Labrador Retrievers, Standard Poodles, Dobermans, German Shepherds, Malamutes, Labradors, Saint Bernards, Wolfhounds, Irish Setters, and Akitas. Some breeds may even be genetically predisposed to the condition – having a first-degree relative (a sibling, parent or offspring) suffer from bloat may be a predisposing factor. Dogs over the age of seven are twice as likely to develop bloat than a dog of 2-4 years of age. Also male dogs are more likely to develop bloat than females, as are underweight or thin dogs.

What causes bloat in dogs?
Many theories exist about why this scenario develops. An older but still accepted theory involves large dogs eating large quantities of food (particularly dry food), eating fast and ingesting air, then drinking large quantities of water, and then exercising. The theory is that the stomach becomes very heavy and “swings” inside the dog’s abdomen. The pendulous momentum sends the stomach in a twisting motion over and around itself.

Since some dogs with GDV have been found to not have a stomach that is excessively full of food or water, newer theories have been adopted. One of these is that, particularly in older dogs, the stomach’s regular contractions become weaker, and air and food can remain in the stomach longer than normal, causing the stomach to become heavy, which then results in the twisting event. Still another theory proposes that, again, particularly in older dogs, the spleen can become enlarged due to congestion or cancer. Since the spleen is so closely associated anatomically with the stomach, it can be involved in causing the stomach to become heavy and pendulous, and then twist.

Regardless of the cause of the twisting, bloat in a dog is a life-threatening medical emergency. For there to be a chance of a good outcome, aggressive medical care must be obtained without delay.

Recognise the Symptoms:
Symptoms of bloat manifest quickly, and once they do, immediate, emergency veterinary attention is needed. When left untreated, bloat can be deadly.

Usually, a dog with this condition salivates, pants, and has a rather remarkable distention of the abdomen that is very hard and painful to the touch. Once these signs appear, the dog can decline rapidly, and death can occur in as little as one hour. A “wait and see” attitude is not advisable. For the best outcome, the dog must be seen by a veterinarian immediately.

Treatment:
Diagnosis is made by x-ray. It is sometimes necessary to decompress the stomach; surgery is usually needed to correct the twisting and stabilise the dog. The prognosis for recovery depends upon the condition of the stomach and other organs at the time of surgery. Despite aggressive treatment, though, many of these dogs do not recover. So, monitor your large-breed dog carefully and seek veterinary care at the first sign of a problem.

Prevention is the Best Cure
• Food. If your dog is susceptible to gastric dilatation, avoid feeding him dry food that absorbs water after being eaten, or at least pre-soak the food in water for 30 minutes before feeding your dog. It is preferable, however, to feed your dog fresh meat-based diets instead of dry food.
• Avoid Grains. The digestive tract of the dog is ideal for digesting protein. Unlike humans, the dog’s gut has a very acidic pH, making it well equipped to resist pathogenic bacteria but not to digest grains.
• High-fiber diets. Dogs that eat high-fiber foods develop a tendency to gas, because high-fiber food tends to ferment and release gas once in the stomach. Beet pulp, soybeans, and brewer’s yeast have a history of being linked to gas.
• Raw Bones. Feeding your dog poultry, lamb or other small to medium size raw bones makes the stomach wall and muscles stronger which will prevent distention. Any gas build-up is much easier to burp out or move downwards into the intestinal tract when the stomach wall muscles are strong.
• Fruits. If you feed your dog fruit, it should never be fed together with the protein meal, because they digest very differently. Fruit digests in the stomach quickly and it will ferment if it remains too long – feed fruit at least one hour before a meal and at least four hours after a meal.
• Fat & Citric Acid. Avoid dog food high in citric acid used as a preservative and also food that is high in fat.
• Supplements. To help your dog digest food properly, give him supplements of probiotics and digestive enzymes.
• Eating fast. Some dogs do not eat their meals; they swallow them without chewing. This can often be seen in multi-dog households where dogs compete over food. Any dog that is afraid that another dog may take away its food will be a naturally fast eater. It helps, therefore, to separate dogs during meals or invest in special dog bowls made to slow down fast eaters.
• Large meals. Feed your dog smaller portions, two or three times daily, instead of just one big meal a day. Also, remove your dog’s food if it is not finished. Even short periods of fasting throughout the day are very important for effective digestion and detoxification.
• Elevated food dishes. At one time, many dog food bowls were elevated to help the dog reach the food easier. However, this caused many dogs to gulp down more air than needed, making them prone to bloat.
• Stress. Dogs that are under stress may develop a predisposition to ingest air and be prone to bloat. The same applies to dogs that are particularly anxious and fearful.
• Strenuous exercise. The general consensus is that dogs should not exercise after eating. This applies to dogs fed both raw and processed food. Avoid vigorous exercise or excitement 1-2 hour before and 3-4 hours after meals (especially of dry food).
• Water consumption. Limit your dog’s water input immediately after eating. Dry food can expand greatly in water, creating a large blob of food that the stomach was not meant to contain.
• Be observant. Do not let your dog eat everything and anything – eating something not agreeable with your dog’s stomach can cause gas to accumulate. If your dog is one of those breeds that are prone to bloat, be aware of the early signs of bloat.

Get Help Fast!
Remember that simple panting is not a sign of a bloat. Panting is the canine way of sweating and is considered normal if your dog looks comfortable.  If you see signs of severe distress – the gums are pale, there are signs of hyper-salivation and the stomach is distended – rush your dog to the nearest vet or emergency clinic immediately. It is better to be safe than sorry. Bloat is an emergency medical condition that requires expert care.

Bloat still kills about 30 percent of the dogs it affects, even after extremely intensive treatment.

If bloat is caught early enough, your veterinarian may be able to insert a tube down your dog’s esophagus to relieve the pressure in his stomach. The other option involves surgery to untwist the stomach. If gangrene has occurred in the digestive tract, some tissue may need to be removed. Following surgery your veterinarian will anchor the stomach to the wall of the abdomen to prevent recurrence of bloat.

Disclaimer: Nothing in this article is meant to substitute for a veterinarian’s advice.

I wanted to tell you what a difference there is in my Corgi dogs arthritis, since starting him on the Ezy Bones. It took about 3 weeks, just as you said it would. So thank you very much, you have another very delighted dog owner on your books!

Cheers Alison,
Toggle the Widgetbar
Do NOT follow this link or you will be banned from the site!