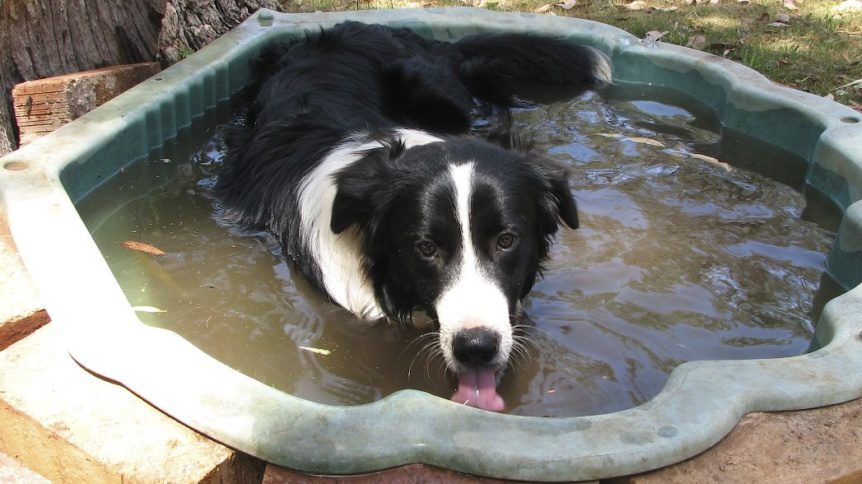 As the thermometer once again starts to reach 40 degrees celsius, we humans can head for the coolest places possible – by the river, in a forest, or inside with air-conditioning ablaze. But dogs aren’t always able to do the same. Their limited options include seeking out shady areas to shelter, drinking lots of water, decreasing their normal activity or digging holes in the cool earth to lie in.

Dogs have a normal body temperature of around 38oc, making them more susceptible to heat exhaustion – especially vulnerable are obese, old and very young dogs. Dogs lose heat through the pads of their feet, and by panting. If you’ve ever had the pleasure of a dog panting in your face on a hot day, you can appreciate that it’s an effective way of blowing off excess heat. If a dog builds up heat faster than it can cool itself, its body temperature rises, making way for the potential deadly condition of heat stroke.

Confinement (especially in a parked car) playing ‘catch’ for too long and lack of water are major factors contributing to heat stroke in dogs. Their body temperature can quickly climb, reaching 55oc within minutes. Their panting will become rapid to the point they sound as though they are choking. Their heart rate becomes very fast.

They will appear to be in daze, often drooling with muscles twitching. Tongue and gums turn purple due to the insufficient supply of oxygen. Legs and head become hot to the touch. They become weak, stagger around, and eventually collapse and may lose consciousness. If the dog is not helped at once, it will die.

The dogs temperature needs to be lowered immediately. Wrap them in a towel soaked in cool (not cold) water. In an extreme case, place them into whatever is available – bathtub, sink or pool. Make sure the dogs head is kept above water, especially if they are unconscious. Also watch out for your own safety, in distress the dog may thrash about franticly. It will take a good 15-30 minutes to cool a dog who is suffering from severe heat stroke. Then call your veterinarian as soon as possible.

Here are some guidelines to help prevent heat stroke:

DO make sure your dog has a cool place to retreat to away from the direct heat of the sun – under a porch, the shade of a tree, etc.

DO make sure your dog has an ongoing supply of water – dogs perspire through salivation and need plenty of cool water always.

DO feed your dog ice cubes if it is confined within a house which isn’t air conditioned – this will help lower its body temperature.

DO take your dog for a brisk walk in the cool of the early morning, or late in the evening when the temperature has dropped.

DO hose your dog down if it appears to be suffering from heat stress. This is a quick way to lower the dogs body temperature.

DON’T leave your dog confined in a non-air conditioned space unless it can get to a ‘cool spot’ (such as bathroom tiles).

DON’T make your dog run alongside you in hot weather – it is best if your dog doesn’t run at all during times of severe heat.

DON’T tie your dog up outside during hot weather, it is more likely to suffer from heat stroke if it is unable to get out of the sun.

NEVER leave your dog in a parked car in intense heat, even if the windows are partly open, or it has a sunroof. It is extremely dangerous. On a 35 degree day, the car temperature can rise to 60-75oc within minutes. THIS IS THE NUMBER ONE CAUSE OF HEAT STROKE.